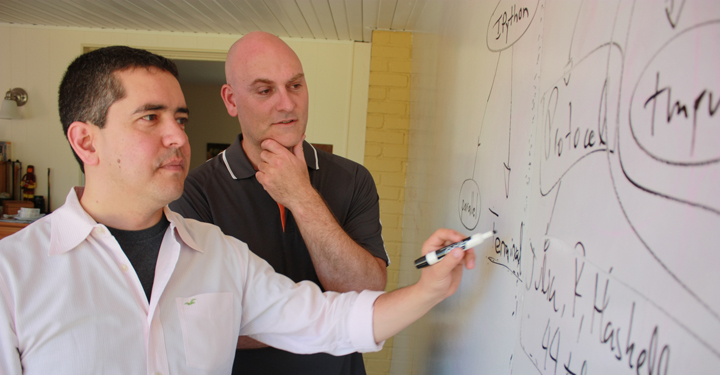 Fernando Perez and Brian Granger discuss the architecture of Project Jupyter, a collaborative computing
software, as its scope expands to work with data science applications in over 40 programming languages.

Project Jupyter may be the best kept secret on the Cal Poly campus, but it’s well-known at companies such as Microsoft, Google and IBM. These tech giants have created entire commercial data science and AI platforms based on the open-source software project.

Co-led by Cal Poly physics Professor Brian Granger and Fernando Pérez of UC Berkeley, the international team that developed Jupyter has been recognized with the 2018 Software System Award from the Association of Computing Machinery (ACM), the world’s largest society of educational and academic computer scientists. Past recipients of the award include the inventors of the World Wide Web, TCP/IP networking, the UNIX operating system and the Java programming language.

When describing the significance of Project Jupyter, the ACM award announcement said, “IPython, the Jupyter Notebook and JupyterHub have become a de facto standard for data analysis in research, education, journalism and industry.”

Dozens of Cal Poly students have joined an international team to develop Jupyter, which has changed the way work is done in industries ranging from genetics to finance. The software has become the go-to tool for authoring and sharing code for computational research, data science and AI.

Jupyter was used by the scientific collaboration that won the 2017 Nobel Prize in Physics for the discovery of gravitational waves. The LIGO/VIRGO collaboration publishes Jupyter Notebooks that allow anyone to replicate their original analyses of the black holes and neutron stars that collide and generate these ripples in spacetime.

“One of the big ideas of Jupyter is a human-centered approach to computational research,” said Granger. “Jupyter lets people write code in a way that creates a narrative, or story, around the code and data. When these narratives are shared with other people, they are able to better understand and visualize the results, make decisions and connect the code and data to their own situations.”

More than 2 million Jupyter Notebooks are hosted on the popular GitHub service, covering technical documentation, course materials, books and academic publications. The L.A. Times, BuzzFeed News and the Chicago Tribune all use the Jupyter Notebook for data-driven reporting, and academic papers often include a Jupyter notebook so that others can reproduce the scientific calculations.

The fifteen-member Jupyter Steering Committee is the largest team ever to win ACM’s top honor. In addition to Granger and Pérez, other members of the Jupyter Project collaboration include Cal Poly’s Carol Willing, Matthias Bussonnier of UC Berkeley, Paul Ivanov and Jason Grout of Bloomberg, Thomas Kluyver of the European XFEL, Damián Avila of Anaconda, Inc., Steven Silvester of JP Morgan Chase, Jonathan Frederic of Google and a Cal Poly Alumni, Kyle Kelley of Netflix, Jessica Hamrick of DeepMind, Sylvain Corlay of QuantStack and Peter Parente of Valassis Digital.