Home : Graduating Students Honored with Awards for Academics and Service

Graduating Students Honored with Awards for Academics and Service

This year's graduating seniors and graduate students boast a wide range of accomplishments. Some maintained perfect 4.0 GPAs while others served the local homeless population in a number of ways. Learn more about these outstanding graduates below. 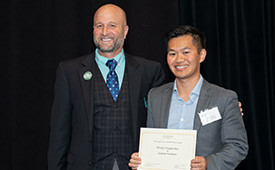 Wesley Kao, a biochemistry major, maintained a 4.0 GPA throughout his Cal Poly career. In addition to his classes, he participated in undergraduate research at Cal Poly and through a research experience at Oregon Health and Science University. He received multiple awards from the Chemistry Department, including Outstanding Student in Biochemistry. An honors student, Kao won the 2018 Honors Program poetry contest. He was also a cellist in the Cal Poly Symphony and a member of the Cal Poly Pre-Dental Society, serving as secretary in 2018-19. 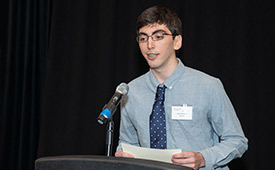 Jason Brown’s professors say he’s a perfectionist in his classes, a description borne out by the 4.0 GPA he brought to Cal Poly as a transfer student and maintained throughout his time here. Brown, a math major, received a score of 10 on the international Putnam Exam, which has an average score between zero and two. He did research on generalized numerical ranges with Professor Linda Patton and presented his results at the Mathematical Association of America meeting. In addition, Brown served as a grader for the Mathematics Department, competed on the Cal Poly table tennis team and squeezed in a physics minor.

Contributions to the Objectives and Public Image of the University 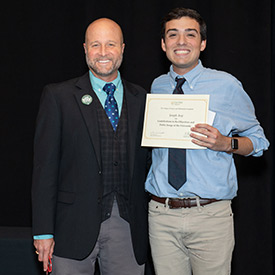 Joseph Araj has been involved with New Student and Transition Programs during all four years at Cal Poly. He was a WOW leader twice and helped to develop a new awareness and diversity program for the 2019 Open House Weekend. Following a summer internship at biopharmaceutical company Genentech, Araj became a Genentech campus ambassador and helped fellow students learn about Genentech research to address life-threatening diseases, as well as internship opportunities at the company. He then assisted many students in applying for and obtaining internships at the company. Off campus, he volunteered at a hospital in his hometown promoting health education through outreach events.

Contributions to the Objectives and Public Image of the College 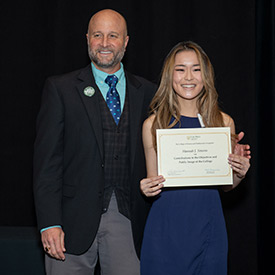 Hannah Simons served as president of two clubs, the Society of Physics Students and Women in Physics. She was also a member of the Physics Honor Society and multiple other clubs. As president of Women in Physics, she led the effort to develop a club philosophy and mission statement and sent a group of 23 student members to the American Physical Society Conference for Undergraduate Women in Physics, the highest attendance of any club that year. An honors student, Simons received multiple scholarships and earned the Emerging Leadership Series Certificate from Cal Poly’s Center for Leadership. In fall 2018, she was crowned Homecoming Royalty at the Homecoming football game.

Service to the Community 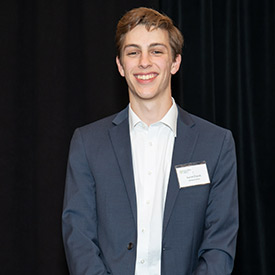 Aaron Dueck served weekly dinners at the 40 Prado Homeless Shelter and then took this experience a step further and founded the SLO GLO 5K Fun Run Advocacy and Fundraiser for 40 Prado Homeless Services. Continuing his service to the county’s homeless population, he created the Homeless Outreach, Advocacy, and Meaningful Education (HOAME) Internship for Cal Poly and Cuesta students to work with Transitions Mental Health Association. Interns will work directly with the homeless community and advocate on campus to reduce the stigma surrounding homelessness. In addition, Dueck helped build gardens with the non-profit Growing Grounds, a program within Transitions-Mental Health Association.

Hayley Crowell designed and completed an ambitious thesis project on rattlesnake body temperatures that won the Best Paper Award from the Society for the Study of Amphibians and Reptiles at the 2018 Joint Meeting of Ichthyologists and Herpetologists. Crowell mentored eight undergraduate students in research and will have three publications by 2020. She received the 2017 Outstanding Teaching Assistant award in the Biological Sciences Department and taught several different lab sections. She has been accepted into the doctoral program in ecology and evolutionary biology at the University of Michigan. 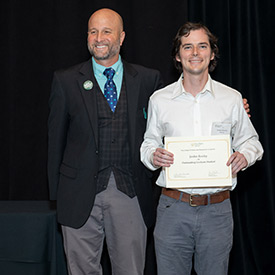 The Cal Poly Student Affiliate of the American Chemical Society provided a number of services to the campus and San Luis Obispo communities. On campus, they hosted an informal undergraduate research poster presentation and networking event at which students interested in research could connect with faculty mentors. They also held workshops for graduate school and internship applications, helped students make connections with industry partners and participated in the Week of Welcome club showcase.

In the local community, members of the club raised money for cancer research through the American Cancer Society Making Strides Against Breast Cancer Walk, led chemistry activities for second graders at Pacheco Elementary School, volunteered at science nights at various elementary schools and hosted an informational and activity booth at the SLO March for Science.