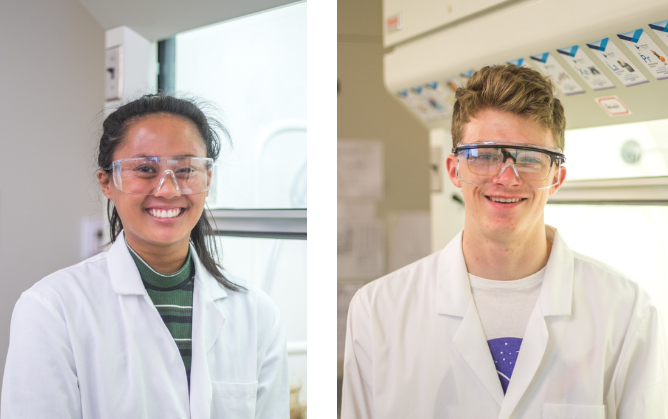 Two Cal Poly students were featured as researchers at the 2020 National American Chemical Society (ACS) meeting. For biology majors Mary Ronquillo and Cole Detels, the opportunity to present at the premier chemical research conference in the U.S. was unmatched.

“Doing research and participating in a formal presentation is the best Learn by Doing experience I've had during my time at Cal Poly,” Detels said.

Detels and Ronquillo are working with chemistry Professor Scott Eagon to create a new class of drugs to fight urinary tract infections (UTI), which have increasingly become resistant to antibiotics. As members of Eagon’s undergraduate research team, the students create new molecules whose properties might contain the key to unlocking and destroying the proteins that keep UTI bacteria cells alive.

In a partnership with Professor Alejandra Yep and her students in the Biological Sciences Department, these molecules are then tested to see whether they’re promising candidates for a new drug.

“Each student chooses a molecule to build. No one’s ever made the molecule before,” Eagon said. “Everything they do, they’re doing it for the first time. It’s a great chance for them to jump in and directly start adding to our scientific knowledge.”

Presenting at the conference allowed Detels and Ronquillo to get a taste of the world of professional chemistry and helped them gain skills they can use no matter what their future career.

“A big aspect of research is working on lab benches, but another important component of the job is being able to verbally communicate the chemistry to others clearly,” Ronquillo said. “Discussing the work I’ve done in the past year and a half has helped me gain a sense of confidence in speaking at a professional setting.”

The undergraduate researchers have also learned they have what it takes to overcome the inevitable failures that come when trying something new, a skill that will make them ready day one for whatever life path they choose.

“The biggest thing I've learned from doing undergraduate research is the normality of failure,” Detels said. “Doing experimental chemistry is very trial-and-error; many reactions don't work, or the product is too difficult to isolate. All this failure only makes success that much sweeter, and I've had the luck to make some real progress on our project during my time in Dr. Eagon's lab.”

Working closely with a faculty mentor on a real-world research project also inspired in both of these biology students a love of organic chemistry. And for Ronquillo, it changed the course of her future career.

“Before doing research, I was set on pursuing a career in direct patient care,” she said. “After spending some time in the lab, I realized that’s not where my true interest lies. I’ve learned to appreciate working independently in my own designated lab space. I’m grateful for being a part of this experience because I was able to gain clarity regarding the direction of my career.”