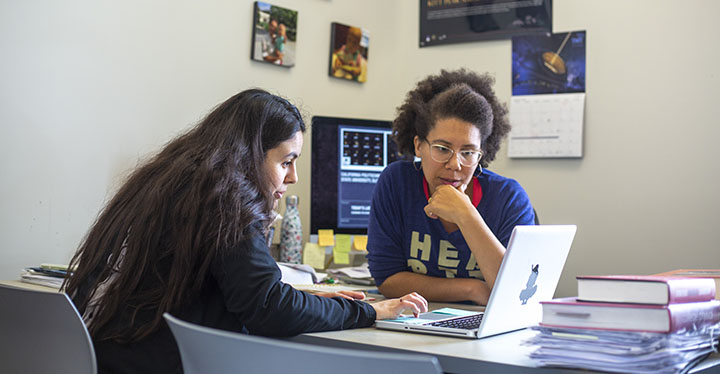 For physics major Priscilla Holguin West, studying astronomy is a future career, a form of social activism--and a lot of fun.

“It's so cool that regardless of how short our time is as humans, we have the ability to study something that's so much greater than ourselves and is always changing,” Holguin West said, describing her love of learning about the universe.

Holguin West translated that passion for discovery into a Chambliss Astronomy Achievement Student Award at the national American Astronomical Society meeting this year. The awards recognize exemplary research by undergraduate and graduate students who present a poster at the meeting.

The higher you go in academia, the less diverse it becomes, which is particularly true in physics

“Hundreds of students apply for the Chambliss awards and about a dozen are given out,” said physics Professor Louise Edwards, Holguin West’s research advisor at Cal Poly.

Holguin West’s poster presented the results of research she did on galaxy formation. As a member of Harvard’s Banneker & Aztlán Institute, she worked with renowned astrophysicist Charlie Conroy at the Harvard-Smithsonian Center for Astrophysics on his study of galactic evolution. Her research focused on verifying a method for computing the physical properties of stars in the Milky Way, such as their temperature and surface gravity.

Acceptance into the Banneker & Aztlán Institute is an honor in itself. Undergraduate students admitted to the program--most of them from African American, Latinx , and/or Native American backgrounds--must show great potential for succeeding as a graduate student in astronomy.

“I knew Priscilla would be the perfect person and that the program would benefit from her passion and dedication,” Edwards said. “She’s been excelling at her research since she got to Cal Poly. Even before she started classes, she reached out to faculty members looking for research opportunities.”

The Banneker & Aztlán Institute focuses on remedying past exclusions and historical admissions practices in graduate programs in the sciences by helping students of color prepare for the first year of graduate school. While there, Holguin West took classes that covered graduate school material, completed weekly readings on social justice, and learned how to recognize and address issues she is likely to encounter being one of the few people--and especially women--of color studying physics.

“The higher you go in academia, the less diverse it becomes, which is particularly true in physics,” Holguin West said. Holguin West is bringing the lessons in social justice that she learned at the institute back to Cal Poly as co-founder and vice president of the new Minorities in Physics club.

“My parents taught me that you speak up for yourself and do what you can to bring others who are disadvantaged up with you. I'm very passionate about that,” Holguin West said. “I want to share the tools and education Banneker & Aztlán gave us to be as successful as possible considering the challenges we as minorities face in a very non-diverse field.”

As Holguin West continues to explore the universe through research with Edwards and to work toward equality in the sciences here on Earth, her trajectory remains fixed on graduate school.