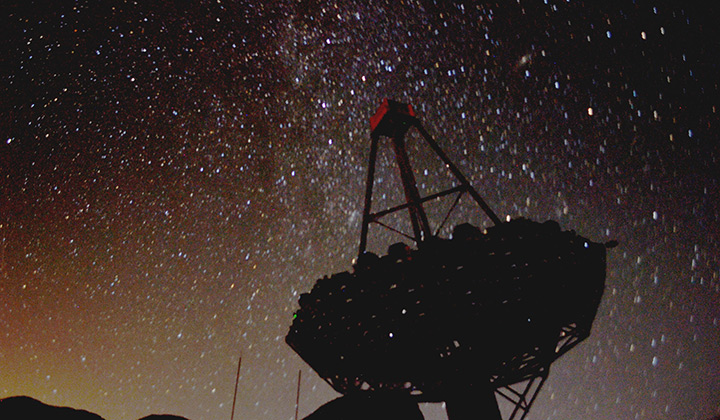 The VERITAS telescope in Arizona was one of a number of telescopes that helped verify
the source of a high-energy neutrino. Photo // Cal Poly students

Cal Poly professors Jodi Christiansen and Stephanie Wissel were on the edge of their seats Thursday when the National Science Foundation announced a revolution in astrophysics. For the first time, scientists have located the source of a high-energy neutrino from another galaxy. This discovery gives them a new way to learn about the universe.

Christiansen studies gamma rays and Wissel studies the subatomic particles called neutrinos, both central to the new understanding of how the universe works.

For more than a century, the origin of the highest energy particles in the universe, called cosmic rays, has been a mystery. The sign of particles being accelerated to become cosmic rays is the emission of neutrinos and gamma-rays, but no one had observed the two together to pinpoint the source of that acceleration.

In September 2017, the IceCube detector in Antarctica recorded a high-energy neutrino, a somewhat rare event. Telescopes around the world and in space then turned to observe the area the neutrino might have come from.

They found a blazar, a supermassive black hole with powerful outflowing jets. These jets accelerate cosmic rays to extremely high energy, and the cosmic rays then emit gamma rays and neutrinos through a variety of physical processes. Though scientists have observed blazars for many years, they didn’t know whether the jets sped cosmic rays up to the highest energies. The combined data from IceCube and the telescopes shows that they do.

As part of the VERITAS (Very Energetic Radiation Imaging Telescope Array System ) team, Christiansen is one of the thousands of scientists who contributed to these groundbreaking observations. She was also part of the team that designed IceCube.

“This is a very exciting time to work in high-energy astrophysics,” Christiansen said. “We now know we have multiple ways to observe the most extreme events in the universe, which could change our understanding of it. We’re present at the dawn of a new era in astrophysics.”

Nearly every summer, Cal Poly students travel to Arizona to observe blazars using VERITAS or work on the telescopes. Others do data analysis back on campus.

“This announcement is an eye-opening experience for our students,” Christiansen said. “They can see how the kinds of observations they’re making might someday change the way we see the universe.”

Wissel and her students are designing a new kind of neutrino detector, and she sees this discovery making a strong impact on her field of study.

“This is a breakthrough!” Wissel said. “We now have multiple ways to peer into the complex dynamics of a blazar and the high-energy sky. I’m excited to see what’s to come as we look to future neutrino detectors.”

The results were published in an article in the journal Science. Several supporting papers further explain the discovery.